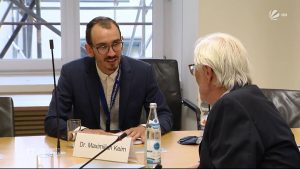 In the course of the expert discussion on “The importance of geothermal energy for future electricity and heat supply”, SAT.1 BAYERN produced a report with Wolfgang Geisinger (Geothermie Unterhaching) and Andreas Lederle (Erdwärme Grünwald) on the expansion and current promotion and funding of networks. Dr. Erwin Knapek (Bundesverband Geothermie) and Dr. Maximilian Keim of the Geothermal-Alliance Bavaria also say some words in the clip.

The report can be viewed in the SAT.1 Mediathek. 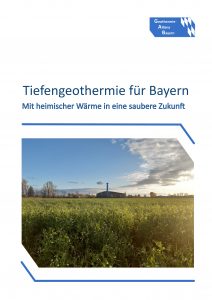 The new brochure of the GAB is addressed to the target group of community representatives, energy suppliers and energy agencies. The brochure addresses both the excellent conditions for deep geothermal energy in the south of Bavaria and the steps to be taken before a project can be implemented.

Only available in german!

“How safe are geothermal power plants?”

In the edition of Tuesday, June 7th, 2021, Südwestrundfunk reported in the documentary series “Wissen” about power generation from deep geothermal energy and the safety of this technology.

dr In the article, Maximilian Keim  talks about how deep geothermal energy works and addresses the concerns that have been expressed in the past, particularly in connection with power generation in the Upper Rhine Graben.

On March 21, 2019, the Bavarian Economics Minister Aiwanger and the Bavarian Social Affairs Minister Schreyer received representatives of the Federal Geothermal Association, the Geothermie-Allianz-Bayern and operators of geothermal systems in the Munich area.

Read the full article by the German Geothermal Association here.

What is behind the increased heat flow rates in Franconia?

interview with dr Wolfgang Bauer, head of the geothermal research group at the Chair of Geology at the GeoZentrum Nordbayern of the Friedrich-Alexander-Universität (FAU) Erlangen-Nuremberg and a member of the Geothermie-Allianz Bayern.

“In Bavaria, geothermal exploration of the subsoil is essentially limited to the Molasse Basin in the south of the Free State. For more than 10 years, deep geothermal projects for heat and power generation have been developed here using seismic 2D and 3D exploration. So far, northern Bavaria has seemed relatively uninteresting for geothermal development. But that is changing now. With a larger-scale research project, the GeoZentrum Nordbayern in Franconia wants to explore the subsoil with 2D seismics and thus gain information about the geological structures. The initiator of this project is Dr. Wolfgang Bauer, head of the geothermal energy research group at the Chair of Geology at the GeoZentrum Nordbayern of the Friedrich-Alexander University (FAU) Erlangen-Nuremberg. 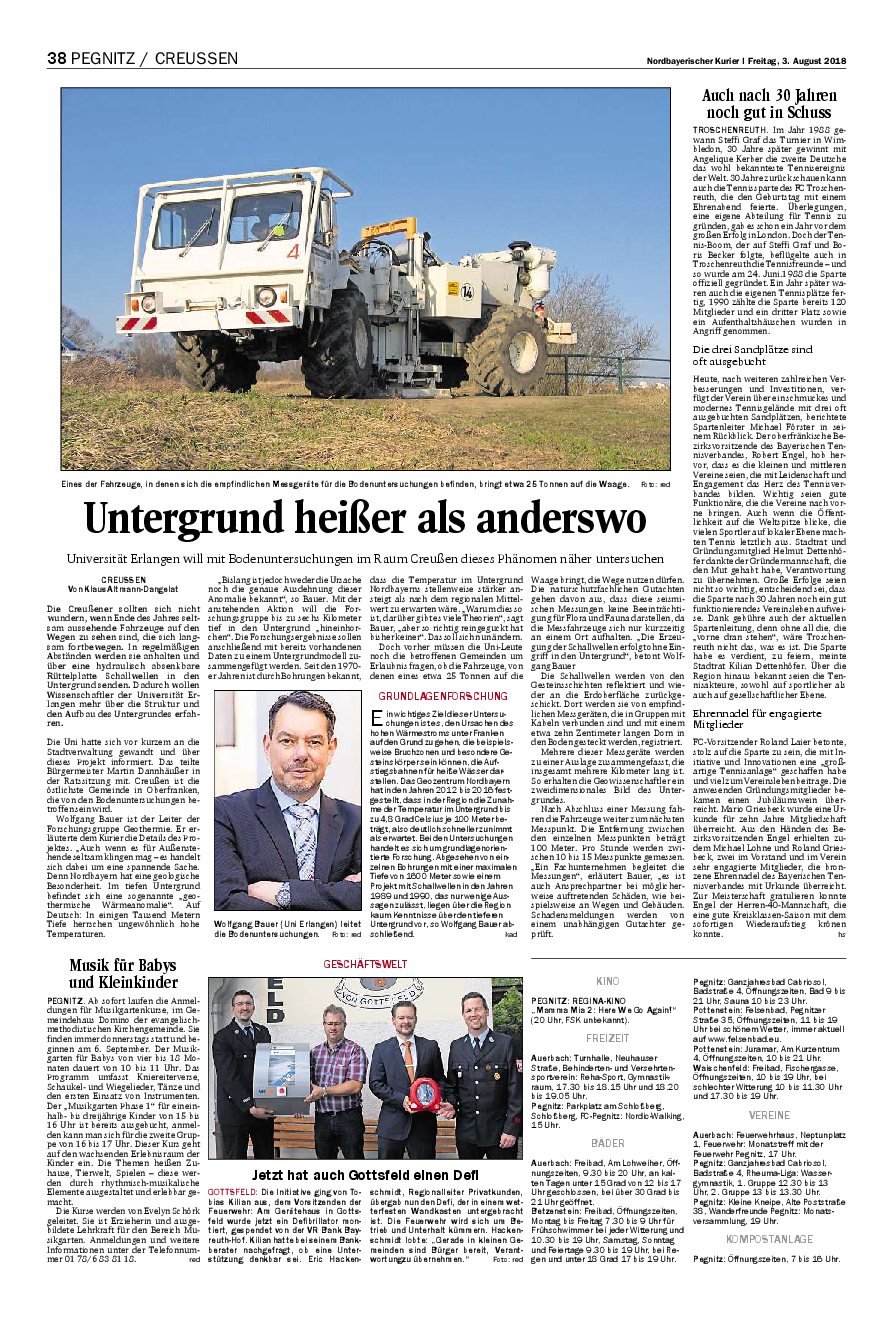 The Süddeutsche Zeitung interviewed Ferdinand Flechtner and asked for an assessment of the earthquake risk from the potential geothermal project in Puchheim. “Nothing has happened with drilling so far”

The geologist and employee of the Geothermie-Allianz Bayern Ferdinand Flechtner assesses the risk of earthquakes for the Puchheim geothermal project as low.

Exhibition "Geothermal energy - heat and power from the earth's interior". 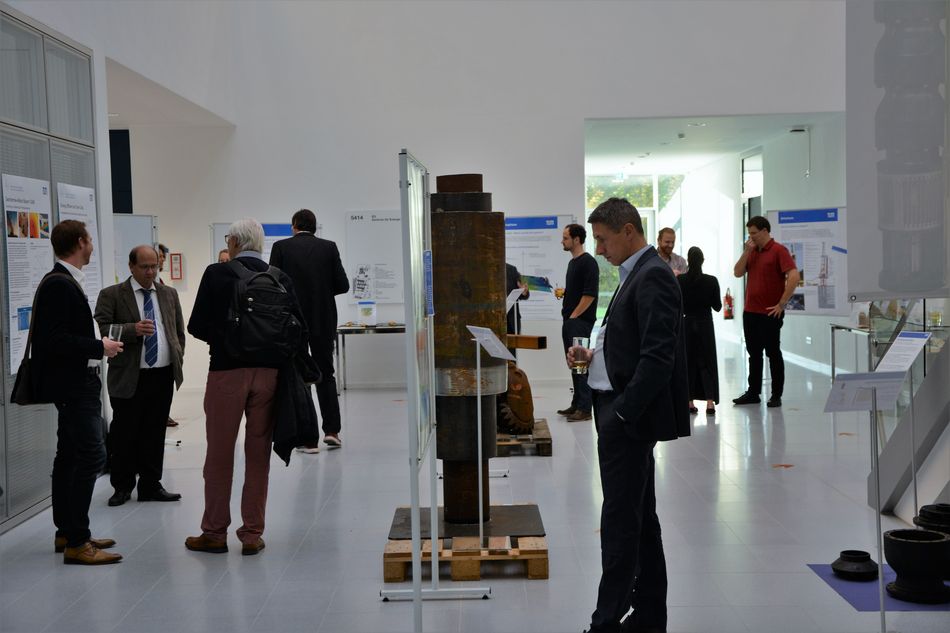 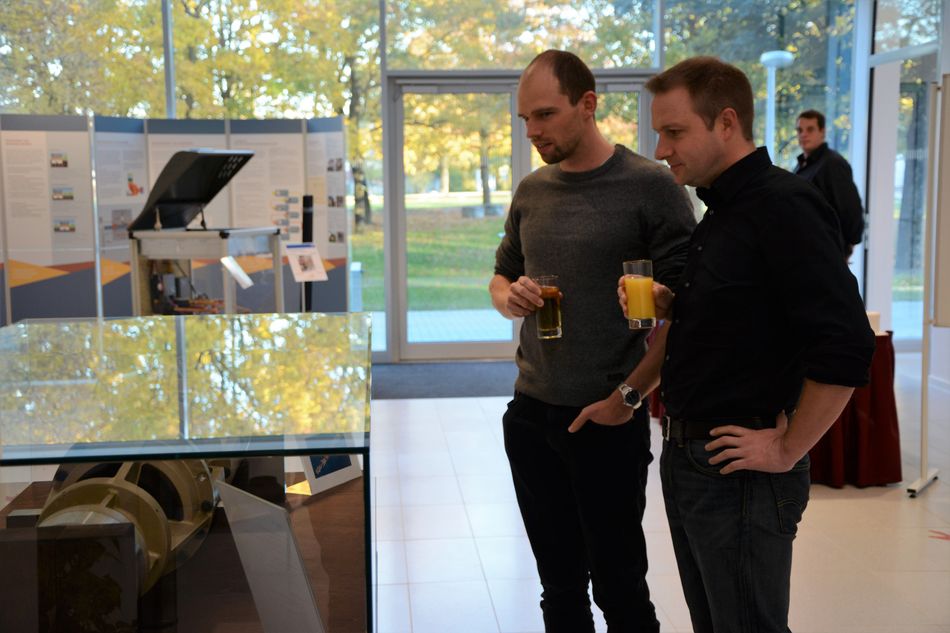 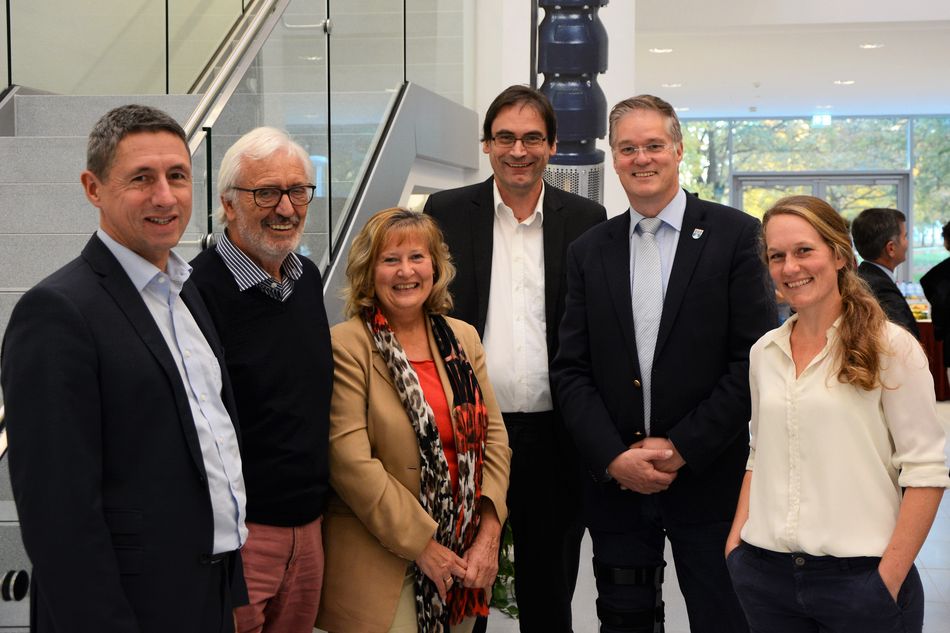 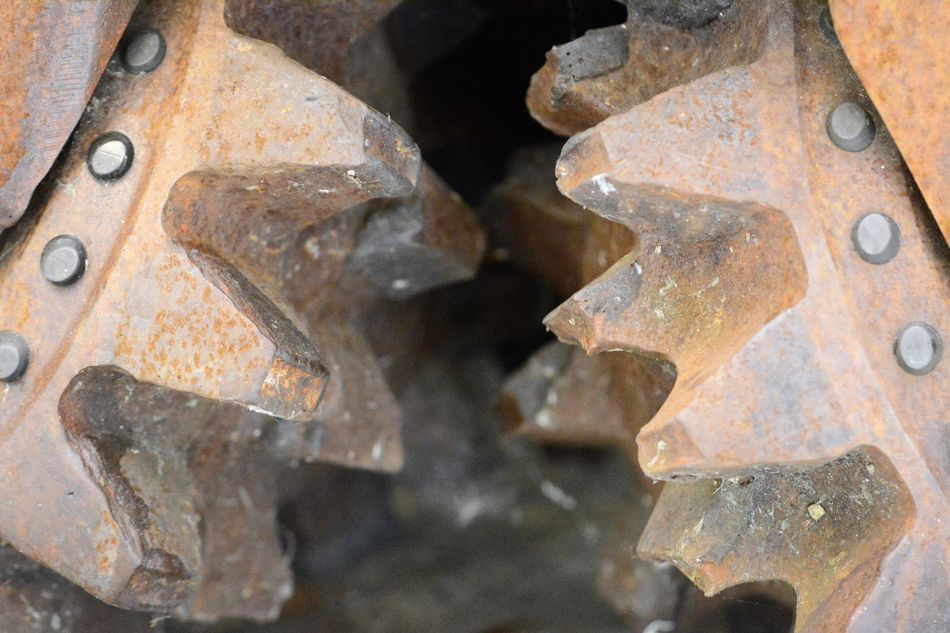 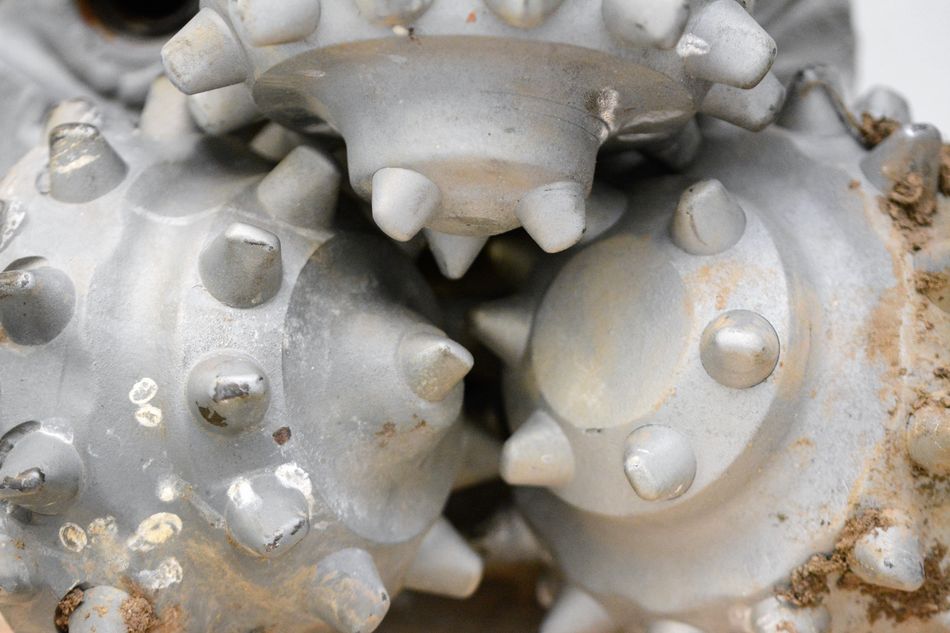 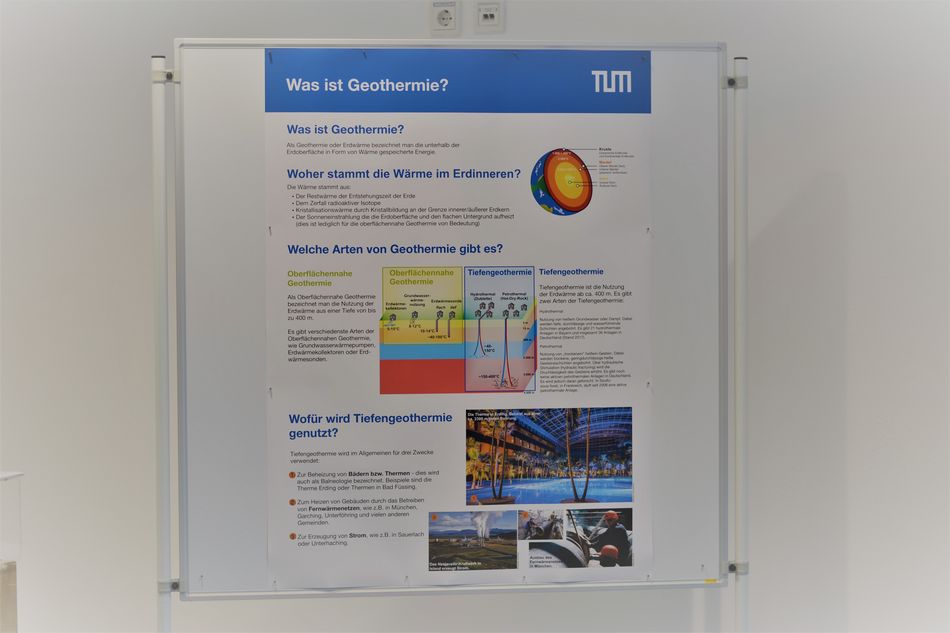 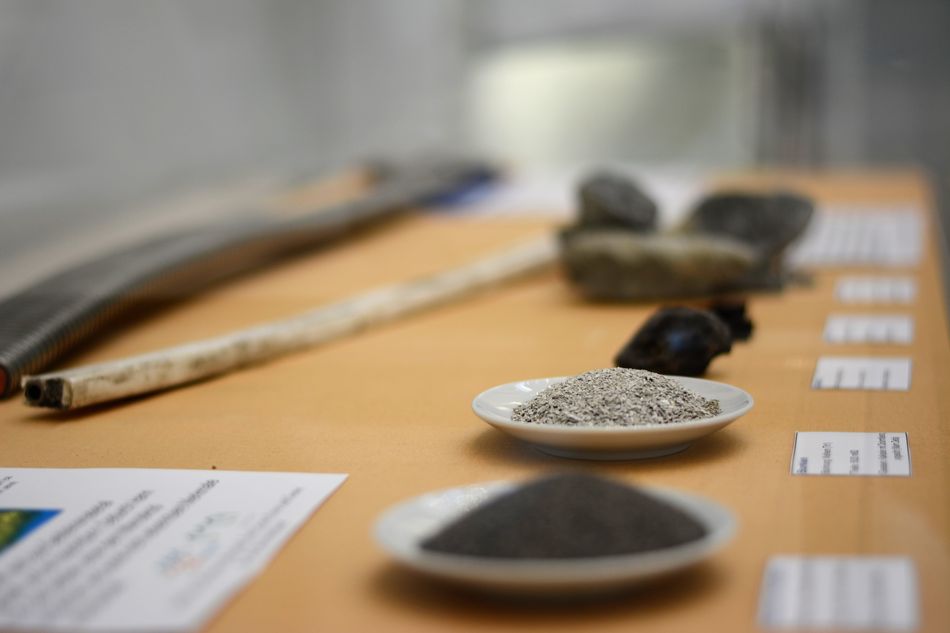 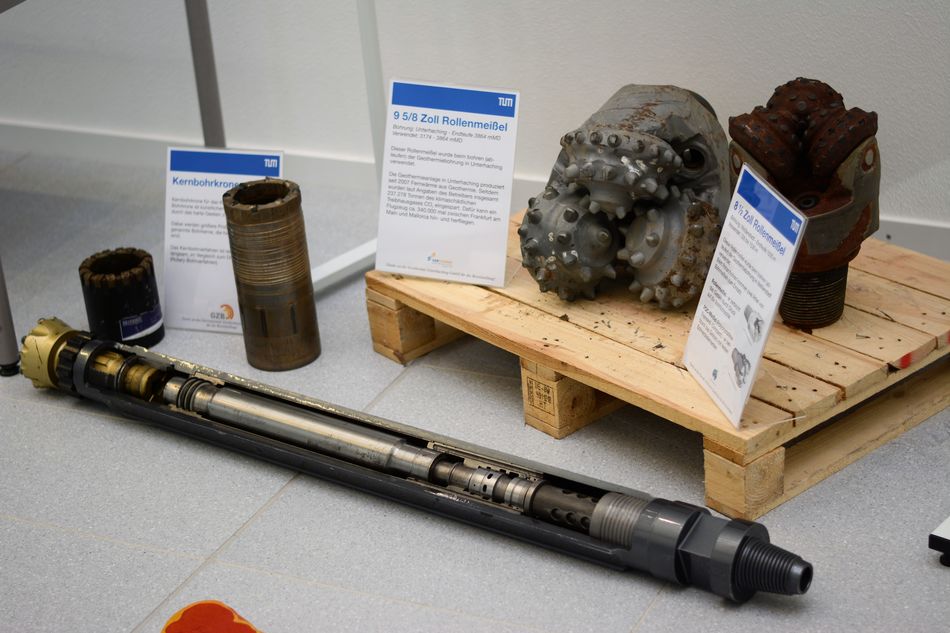 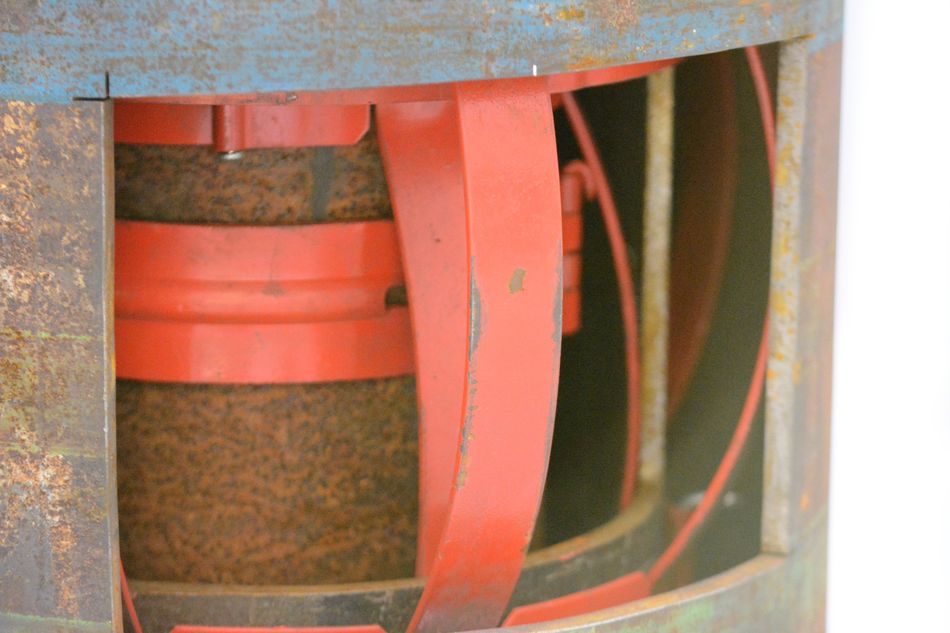 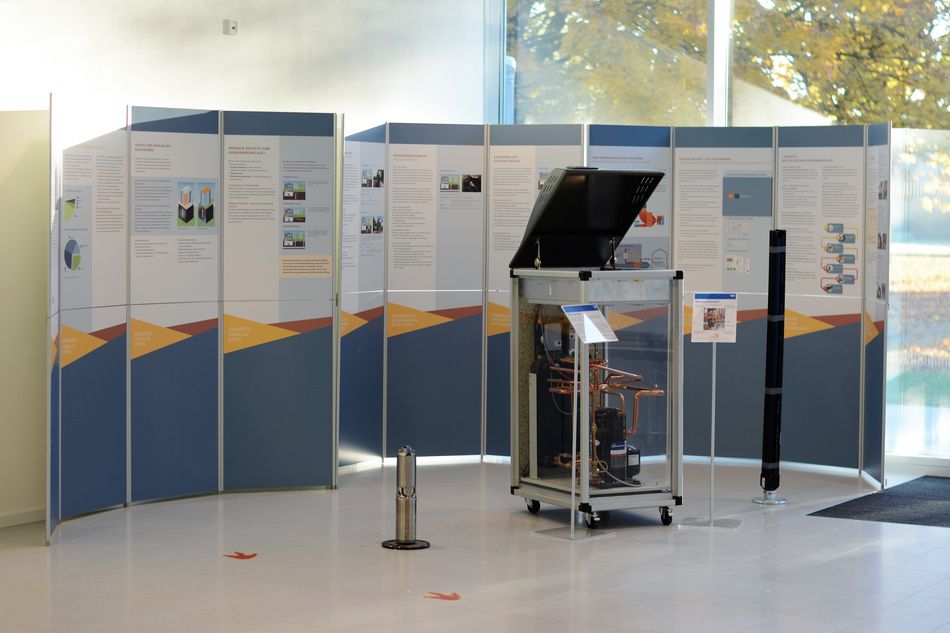 Impressions of the exhibition opening

Everyone is talking about geothermal energy – but how exactly does this technology work?

We want to deal with these and other questions in the exhibition of the Geothermie-Allianz Bayern  “Geothermie – Heat and electricity from the earth’s interior”  .

A lot of information, exhibits and experiments await you.
You can access our virtual tour here.

Where?
Center for Energy and Information
Lichtenbergstr. 4a
85748 Garching near Munich

Moderne Gebäudetechnik, Issue 3/2017: Heat from the depths for the energy transition

The trade journal Moderne Gebäudetechnik reports in its issue 3/2017 in the special section “Renewable Energies” about the Geothermal Alliance Bavaria.

In this interview, project coordinator Dr. Katharina Aubele from the Munich School of Engineering at TUM talks about the advantages of this renewable form of energy and explains the areas in which research is still needed.

Erdwärme Grünwald informs about the cooperation with the Geothermal Alliance Bavaria, 7.2.2017 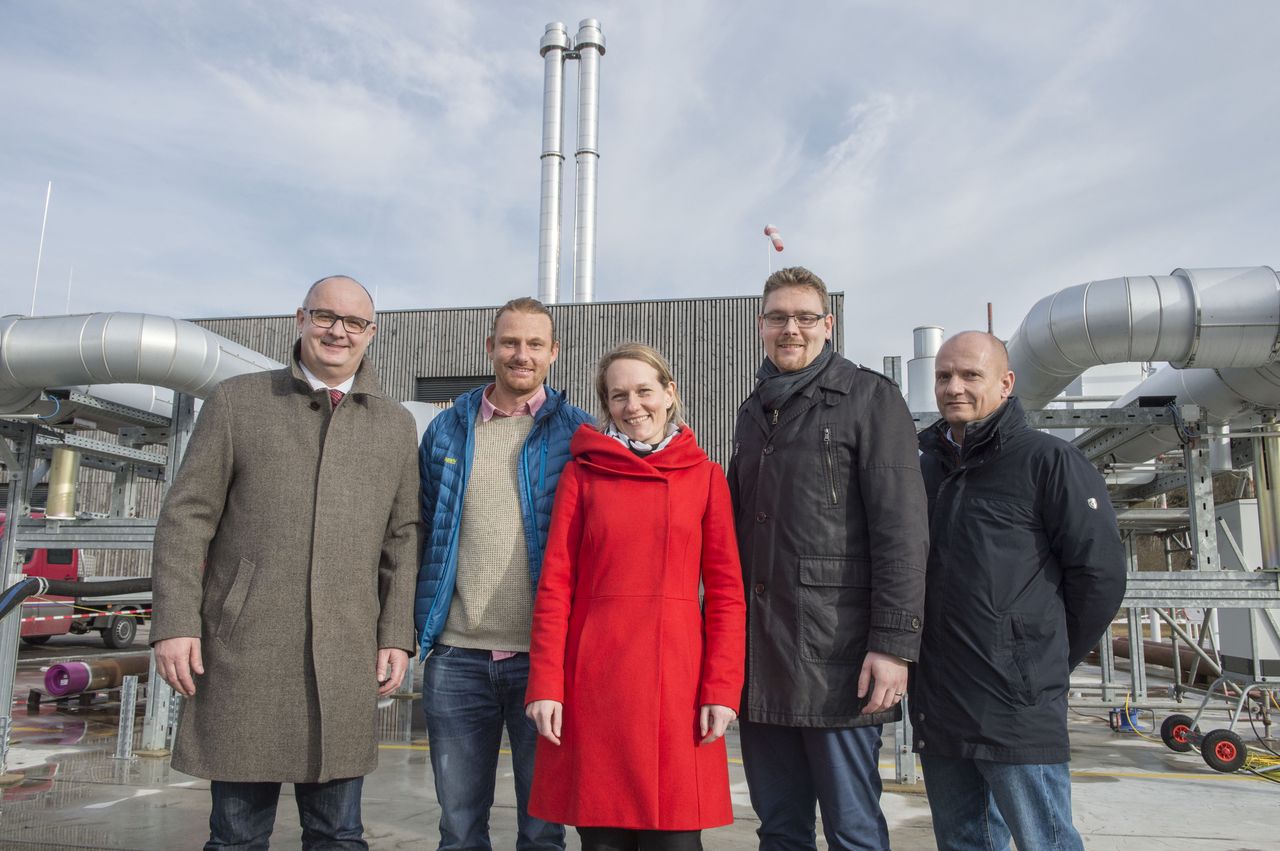 Erdwärme Grünwald GmbH informs on its homepage about the visit of the Geothermal Alliance Bavaria at the geothermal heating plant in Laufzorn.

geologist dr. Katharina Aubele, project manager of the Geothermie-Allianz-Bayern, visited the EWG in Laufzorn with her team. Common goal: learn from each other and gain new insights into deep geothermal energy through practical research.

Due to an initiative of the Bavarian state government, the “Geothermie-Allianz Bayern” (GAB) was created in 2016 – an interdisciplinary research project by the Technical University of Munich, Friedrich Alexander University of Erlangen-Nuremberg and the University of Bayreuth on aspects of deep geothermal energy. The project is funded by the Bavarian State Ministry for Education and Culture, Science and Art and will run at least until the end of 2019, an extension to 2020 is possible. The Geothermie-Allianz Bayern works closely with the geothermal plant operators.

In order to present the ongoing research projects and to discuss the details of data provision, GAB project manager Dr. Katharina Aubele from the Munich School of Engineering at the Technical University of Munich describes the Grünwald geothermal heat system in Laufzorn. In close coordination with the participating chairs, she coordinates various research projects: among other things on the characterization of the geothermal reservoirs, on the operational reliability of the thermal water cycle, in relation to the submersible centrifugal pump and precipitation from the thermal water (so-called scaling), as well as on the efficient and flexible power plant.

“Our goal is to gain an even better understanding of the processes underlying deep geothermal energy,” says Dr. Katharina Aubele, “We want to help further reduce the discovery risk and make the operation of geothermal heating plants and power plants even more efficient. The close cooperation with the plant operators of deep geothermal energy in Bavaria plays a decisive role in this.”

“We attach great importance to close cooperation between research and practice,” says Andreas Lederle, Managing Director of Erdwärme Grünwald. “Science benefits from the data that we provide from the operation of our systems. And we and other geothermal operators will benefit from the knowledge that the scientists will gain. This will benefit the entire deep geothermal energy in Bavaria.”

With the Bavarian Geothermal Alliance…

… the Bavarian state government has been funding practical research into deep geothermal energy since 2016. This funding enables active scientific monitoring of geothermal projects in Bavaria and is planned for a total period of five years. With the geothermal alliance, geothermal research in Bavaria is to be expanded and bundled at the participating institutions in order to tackle relevant research topics together. In addition, it is also the declared goal to promote application-oriented research in close exchange between industry and science and, if necessary, to expand the network.

… teaches and researches technologies in the fields of environment & climate, energy & raw materials as well as mobility & infrastructure. To this end, it brings together different faculties of the Technical University of Munich (TUM) as an “Integrative Research Center”.

Here  you get to the article on the homepage of Erdwärme Grünwald GmbH.

TUMcampus, the magazine of the Technical University of Munich, reports on the joint research project Geothermie-Allianz Bayern.

Deutschlandradio Kultur reports on the Geothermal Alliance Bavaria: ZEITFRAGEN from 6.12.2016

Bayerischer Rundfunk reports on the Geothermal Alliance Bavaria: Rundschau from 4.12.2016

Impressions from the kick-off event of the Geothermal Alliance Bavaria

On September 30, 2016, the celebratory project kick-off event of the “Geothermie-Allianz Bayern (GAB)” took place in the premises of the Institute for Advanced Study (IAS) on the research campus of the Technical University of Munich in Garching.

The Geothermie-Allianz Bayern is an interdisciplinary joint research project of the Technical University of Munich, the Friedrich-Alexander-University Nuremberg-Erlangen and the University of Bayreuth, which is funded by the Bavarian State Ministry for Education and Culture, Science and Art. The overarching goal of the alliance is to strengthen geothermal energy as a domestic energy source and to promote active exchange with representatives of the geothermal industry. Various interdisciplinary research projects are being promoted at several chairs and institutes of the participating universities, networked via the project management at the Munich School of Engineering of the Technical University of Munich.

Information about the sub-projects and the employees can be found <link gab internal-link>here.

With these words, Dr. Erwin Knapek, Chairman of the Bundesverband Geothermie e. V., joined the panel discussion in the late afternoon. Accordingly, the tenor of the round that formed the conclusion of the official program of the event and which was characterized by a positive spirit of optimism. Representatives of the economy, politics and science discussed constructively here with open words on the topic “goals of the geothermal alliance”. In the course of the discussion it became clear that – in line with GAB’s idea of ​​networking – there must be increased cooperation between plant operators and scientists in order to master the existing challenges together.

On September 30, 2016, the project launch event of the “Geothermie-Allianz Bayern (GAB)” will take place in the premises of the Institute for Advanced Study (IAS) on the grounds of the research campus of the TU Munich in Garching.

The GAB is an interdisciplinary joint research project of the Technical University of Munich, the Friedrich-Alexander University of Nuremberg-Erlangen and the University of Bayreuth. The overarching goal of the alliance is to strengthen geothermal energy as a domestic source of energy and to promote active exchange with representatives of the geothermal industry. Various interdisciplinary research projects are being promoted at several chairs and institutes of the participating universities, networked via the project management at the Munich School of Engineering of the Technical University of Munich.

The event starts at 1:00 p.m. with a presentation of the project, followed by scientific presentations by the project participants. Afterwards there is the possibility to find out more about the current results of the sub-projects during a poster session. Around 4:00 p.m., a panel discussion between representatives of business and science on the subject begins, which can be continued in an informal setting with a buffet and drinks in the IAS rooms and, hopefully, on the roof terrace, if the late summer weather is nice.

We would like to point out that film recordings will be made during the event by the media center of the TU Munich. If you are interested in participating, please contact the GAB project coordinator. You can reach us by email at gab@mse.tum.de or by phone on 089 / 289 10641.

For questions and details of the event, we are available by phone and email.

Link  to the news report on the MSE homepage.